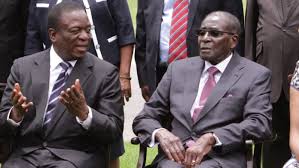 EMMERSON MNANGAGWA has been sworn-in as Zimbabwe’s president.
His took the oath of office moments ago before the Chief Justice of Zimbabwe and a crowd of over sixty thousand Zimbabweans who witnessed the event at the nation’s national stadium in Harare.
This follows the dramatic departure of ROBERT MUGABE after 37 years of authoritarian rule.
His dismissal this month led the ruling Zanu-PF party and the army to intervene and force Mr MUGABE to quit.

EMMERSON has promised to bring economic reforms that will bring about a more prosperous Zimbabwe.