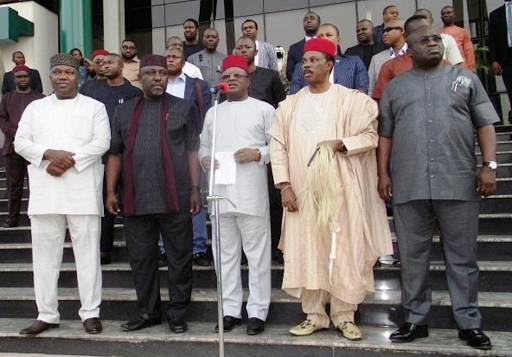 Chairman of the South East Governors’ Forum and governor of Ebonyi State, Mr. David Umahi, has explained why they won’t abandon leader of the Indigenous People of Biafra (IPOB), Nnamdi Kanu.
Umahi said, having proscribed the activities of the group and its eventual label as a terror group, Kanu and his team needed to rebrand before they would enter any dialogue with them.
Recall that a Federal High Court in Abuja, had declared the activities of the Indigenous People of Biafra (IPOB) as “acts of terrorism”.
Speaking on the development, Umahi told Sun that they would continue to appeal to the agitators on the need to work for a one and united Nigeria.
He said, “Our situation is different from Boko Haram situation. But if anybody believes that we will abandon those boys, it is not true.
“We will still be appealing to them to come back to their leaders, let us sit down and discuss. Kanu somehow raised awareness on this restructuring issue. We must give it to him.
“We are not going to throw him away; we will still find a way; we will be appealing to the federal government for forgiveness. The word, IPOB, is not in agreement with me because when you say the Indigenous People of Biafra, it has its own connotation. When you say indigenous, if you go to America you talk about the indigenous people of America and that is the Red Indies that founded America.
“There is no indigenous in this sense. It could be Igbo Youth Movement or association and so on and so forth. So having proscribed that and their activities, of course the federal government says it’s a terror group; we cannot dialogue with them under that name again. They’re our brothers and sisters and it’s a question of getting them to a better level of understanding and partnership.”
Asked what will happen to anyone that will wear Biafra’s insignia or carry its flag since the group has been proscribed, Umahi added the decision should be left for the president to make.
“Well, there are two issues here. One is that we have appealed to Mr President to withdraw the soldiers in the South- East region at least for now for temper to cool. I am not the Commander-In-Chief of the Armed Forces; it’s Mr President who is. It is an appeal that we have made to him. It is his constitutional powers and rights.
“So, I cannot say for certain that Operation Python Dance will not commence in Ebonyi State. I don’t have such powers. But if Mr President views it that in his own opinion that he wants to heed to our appeal, that is good. But specifically in Ebonyi State, we are appealing that everybody should be law-abiding. There’s no nation inside a nation. Even if you want Biafra, you have to get it first; become a nation before you start putting up your flag, owning your own secret service and so on and so forth.”