Home News “How can anyone go to bed when workers have not been paid... 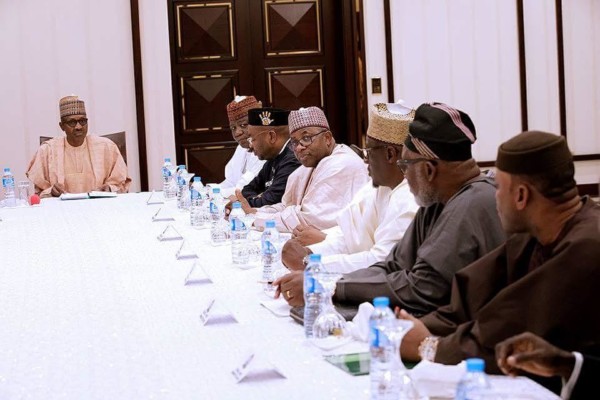 President Muhammadu Buhari on Tuesday expressed concern on the growing complaints and agitations by workers in states over unpaid salaries and allowances, in spite of interventions by the Federal Government.
The President made his feelings known when he received a group of governors led by the Chairman of the Nigerian Governors’ Forum, Abdul’Aziz Yari, at the State House, Abuja.
The Federal government had on May 4 released details of the second tranche of Paris Club refund to States totalling N243.795 billion.
A breakdown of the payment, showed that Abia got N5.72 billion; Adamawa, N6.11 billion; Akwa Ibom, N10 billion; Anambra, N6.12 billion; Bauchi, N6.88 billion; Bayelsa, N10 billion; Benue, N6.85 billion; and Borno N7.34 billion.
Cross River got N6.08 billion, Delta, N10 billion; Ebonyi, N4.51 billion; Edo, N6.09 billion; Ekiti, N4.77 billion; Enugu, N5.36 billion; Gombe, N4.47 billion; Imo, N7 billion; Jigawa, N7.11 billion; and Kaduna, N7.72 billion.
Kano got N10 billion, Katsina, N8.2 billion; Kebbi, N5.98 billion; Kogi, N6.03 billion; Kwara, N5.12 billion; Lagos, N8.37 billion; Nasarawa, N4.55 billion; Niger, N7.2 billion; and Ogun, N5.7 billion.
The others were Ondo, N7 billion; Osun, N6.3 billion; Oyo, N7.9 billion; Plateau, N5.64 billion; Rivers, N10 billion; Sokoto, N6.44 billion; Taraba, N5.61 billion; Yobe, N5.41 billion; Zamfara, N5.44 billion; and the Federal Capital Territory, N684 million.
The refund is in respect of over-deductions on Paris Club, London Club Loans and Multilateral debts between 1995 and 2002.
However, President Buhari said the plight of workers in the states needed urgent attention as many could barely survive.
“How can anyone go to bed and sleep soundly when workers have not been paid their salaries for months. I actually wonder how the workers feed their families, pay their rents and even pay school fees for their children,” he said.
The President told the governors that two out of the three-pronged focus of the ruling All Progressives Congress (APC) to secure the country and fight corruption had received some commendable reviews by the people.
He further noted that the challenge in payment of salaries in states had taken a toll on the people.
President Buhari said the Federal Government and state executives would need to work closely together to ameliorate the situation of workers across the country.
He added, “God has been merciful in hearing the prayers of his servants so the rainy season has been good, you can ask the Kebbi State Governor on this, and our enormous food importation bill has gone down.’’
The President said he had instructed all government agencies to comply with the Treasury Single Account (TSA) in order to ensure more transparency and prudence in accounting for the revenues of the government and the sharing of entitlements with states.
In his remark, the Chairman of the Governors’ Forum said the various interventions by the Federal Government, which included the bailouts, were judiciously utilized by the states.
He stressed that the governors inherited backlog of unpaid salaries and huge debts portfolios on assumption of office.
“We are concerned with the situation in our states, and we are trying our best to manage the resources,’’ he said.
Yari noted that the bailout funds, and part of the fallout from the London-Paris Club that had been received by the states, were properly expended to alleviate the plight of workers, but more had to be done.
The NGF chairman also commended the efforts of the President in improving the economy.
He assured that the states would continue working with the Federal Government to improve the livelihood of workers and all Nigerians.
Governors of Ondo, Bauchi, Jigawa, Kwara, Akwa Ibom and the Deputy Governor of Ebonyi State among those who visited the President.
Culled: BellNaija