Former Nigerian Vice President, Atiku Abubakar, who was in Ekiti State on Tuesday to consult with Governor Ayo Fayose on his presidential ambition, has insisted that corruption allegations against him are false, Premium Times reports.

Mr Abubakar is seeking the ticket of the Peoples Democratic Party to contest next year’s presidential election.

He was vice president under President Olusegun Obasanjo, from 1999 to 2007.

Mr Atiku fell out with his principal shortly after the 2003 elections which the PDP won. He was later accused of involvement in corrupt practices for which he was investigated by the Senate.

The Senate in 2006 carried out an investigation through an ad hoc committee of the Senate headed by Victor Ndoma-Egba, and in its report released in 2007, found him guilty of helping himself with funds belonging to the Petroleum Training Development Fund (PTDF).

Mr Abubakar consistently denied the allegations, accusing Mr Obasanjo and the Senate of political persecution and attempting to stop his ambition of becoming president.

In pursuit of his ambition, Mr Abubakar recently dumped the All Progressives Congress (APC) for the PDP, and is one of the leading aspirants in the party.

He told delegates in Ado Ekiti on Tuesday to be united ahead of the 2019 general elections, saying PDP has a good prognosis to win the presidential poll if leaders exhibited extraordinary commitments.

“I have always said that if they have any evidence of corruption against Atiku, please come forward. But nobody has been able to come forward,” he said.

It will be his second time in Ekiti State since he returned to the PDP. He was received by Ekiti State prospective delegates as well as Mr Fayose.

He noted that he had a well packaged and distinct blueprint to develop the country if elected to succeed President Muhammadu Buhari.

He however, lamented that the country had sunk into more corruption in the administration of President Buhari, and that even during the civil war, Nigeria had not been as insecure as the country was in this dispensation.

“I have come to appeal to you to support me in our party’s convention. I have the programme that will best develop this country. I wish to appeal for your individual and collective support,” he said.

He described Mr Fayose as a straight forward person, who spoke his mind when it mattered.

“I like the way you do things. You’re brutally frank. You say your mind, it’s a very rare quality. So, I commend for who you are,” he commended the governor.

“We will stand by you and the party in Ekiti until you retrieve your stolen mandate,” he said, referring to the July governorship election in the state won by the APC.

Mr Fayose called for unity of the members of the party, saying Mr Abubakar has what it takes to lead the country, praying that his efforts would not be in vain.

He also charged the party on unity, saying, “the greatest problem PDP may have is if we don’t go to that election as brothers and sisters.”

“The task before the PDP at this time is not about who has been in the party before and who is just joining. It is about rescuing Nigeria and its people from the calamity of this Buhari’s government,” Mr Fayose asserted.

“Atiku is the option to a ‘lifeless president.’ He’s not dead, but he is not somebody that can be counted to lead Nigeria to the promised land.” 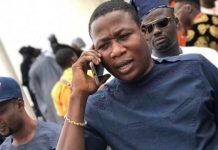 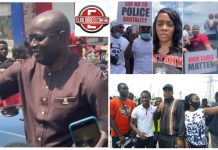