Facebook
Twitter
Pinterest
WhatsApp
Twenty-seven-year-old Ransom Linus Martin, four months into her first pregnancy, has come to the Land of Promise church near the city of Calabar for prayers, but it is also where she will be giving birth.

She is not alone in her choice, but campaigners are trying to end the practice which is widespread in southern Nigeria.
The stocky woman, wearing a knee-length lace dress and a deep yellow beret is blunt about why she, and other women, opt for a church birth with a traditional birth attendant rather than going to a maternity clinic.
“They do fasting and prayer here, and if you are pregnant you need to go to the place where there is God and there is daily fasting and prayers.
“At the hospital there is nothing like prayer. They don’t pray. They only give you injections. But as you pray at the church, you get closer to God.
“On the day of your delivery, God will help you and you will deliver successfully.”
Ms Martin believes that the church and God will offer more protection than modern health facilities. Unfortunately, there are reports of many women dying while giving birth in the facilities provided by a church.

Dr Linda Ayade, the state governor’s wife, is so concerned about the possible dangers of a church birth that she is campaigning to ban the practice, and is encouraging women to instead go to health centres to deliver their babies.
She has been going from village to village across the state, trying to persuade expectant mothers.
At a meeting in Uwanse village she speaks with passion in a local language, Efik, and the women are attentive, excited at being visited by a high-ranking official.
Later, she explains her motivation: “I have worked in hospitals in Nigeria and I have first-hand experience of pregnant women being rushed in at critical times when they can no longer be helped.
“Some are even confirmed dead on arrival, and it happens quite often. I have taken it as an obligation to save lives and reduce incidences of maternal mortality relating to child birth and delivery, knowing what it means for a mother to die and leaving children behind.”
It may, however, take some time before everyone is won over, as child delivery is associated with deep-seated traditional beliefs.

Dr Ayade’s status does attract a crowd to her meetings, but prayer sessions are also packed out.
At the Land of Promise church, a congregation of mostly pregnant women sings and prays, asking God to intervene and deliver their babies at the appointed time.
Attached to the prayer hall is the room where the women will give birth – it is small and dirty and lit by a paraffin lamp.

Sister Indoreyin Sambhor is the pastor and the church’s traditional birth attendant. The short, middle-aged woman says delivering babies is a tradition in her family handed down from mother to daughter.
“This is the work that God gave me to do. From my youth, I helped my mother to deliver babies. God has been helping me, and God will not allow anything dangerous or evil to happen.
“I pray with the mothers and my followers can testify about my skills… Every pregnant woman that has come to me has delivered safely and gone home with their children.”

“God has been helping us so I don’t even believe that there can be complications in children delivery.”
Twenty-six-year-old Mercy Martin Udofia, in her eighth month of pregnancy, is a follower of Sister Indoreyin.
Wearing a tight-fitting dress that shows her bulging tummy, she says she gave birth to her first child in this church, and she will come back for a second time.
“As a child of God, you do not stay idle, you have to be closer to God. So that as a pregnant woman, when it comes to the time of delivery, everything will be easy for you.”
But things are not always so rosy. A woman recently died while giving birth to twins at a church in the Burrow Pit suburb of Calabar.
A relative of the deceased said she passed away following complications arising from a retained placenta which the traditional birth attendant could not deal with. The twins survived and are currently being treated at a hospital in Calabar. 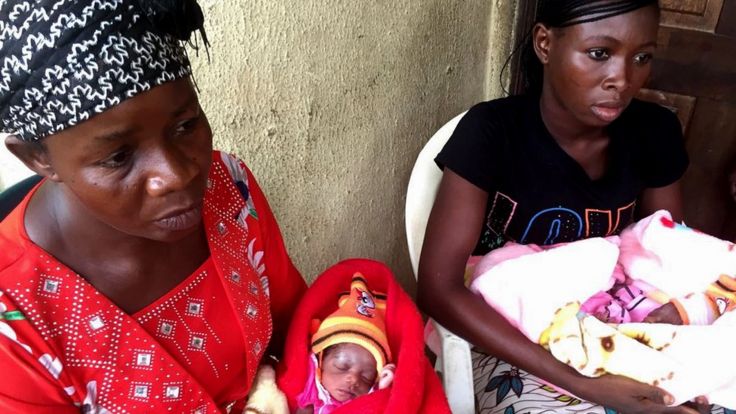 The authorities are taking action to deal with the issue.
Head of the state primary health agency Betta Edu says the state government will soon be passing a law aimed at stopping pregnant women giving birth in churches and seeing traditional birth attendants.
She thinks that many traditional birth attendants tell women that hospitals and health centres only carry out caesareans, and some of them could die as a result of heavy bleeding.
With such fears at the back of their minds, they see the birth attendants as the best choice, as they are both closer to God and have the traditional skills to help them deliver safely.
But Dr Edu argues that the practice will die out with a change in the law and the building of new health centres in every community.
All those involved in trying to change attitudes recognise that a lot of work still needs to be done.
Our people are deeply religious, and some of them are so deep in the traditional practise that it’s usually very difficult to shrug them off,” Dr Ayade says.
“We need to educate them, encourage them and even entice them.”