Pressure is mounting on Nigeria’s Senate President, Bukola Saraki, to resign following the recent Panama Papers leak.
Saraki is already facing 13 charges at the Code of Conduct Tribunal (CCT) for falsely declaring his assets when he served as governor of the central Kwara state – charges he has denied.
But as his trial resumed at the CCT on Tuesday, fresh allegations relating to the leader of Nigeria’s upper house emerged.
Nigeria’s Premium Times newspaper, reported that the politician’s family held four undeclared offshore assets, including a multi-million dollar property in London.
But Saraki has denied any wrongdoing in a statement, explaining that he had declared all his assets as required by law, according to the BBC.
Premium Times reported that a prosecution witness, Micheal Wetkast, appeared before the Tribunal on Tuesday to testify against Mr. Saraki’s not guilty plea by providing evidence of alleged transaction by the Senate president with banks in Nigeria.
The witness said the proceeds of the said transactions were used to purchase properties, some of which were never declared by Saraki. 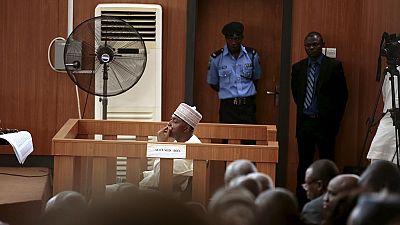 Nigeria’s Vanguard newspaper has also reported that some senators have asked their leader to consider resigning even before the conclusion of his case to save the senate as an institution.
Local media are reporting that the Senate president’s resignation is imminent.
Saraki stands to lose his position as Senate President if found guilty by the Code of Conduct Tribunal which is a special court set aside to try asset declaration misdemeanors.
He would also be barred from holding any public office for up to 10 years and could be jailed.