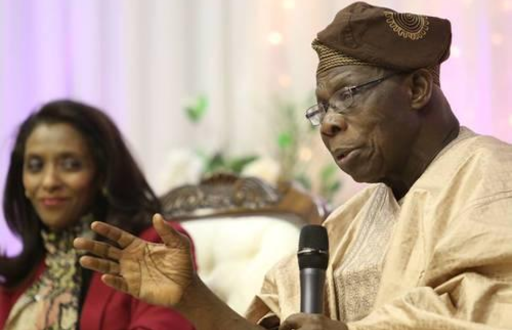 Former Nigerian president, Olusegun Obasanjo, has implored President Muhammadu Buhari to establish a dialogue with the leader of the separatist Indigenous People of Biafra, IPOB, Nnamdi Kanu.
Mr. Obasanjo, who said this during an interview with the Newsweek Magazine, noted that the dialogue would curb the secessionist agitation in the South East region.
‎
Mr. Kanu is the arrowhead of a new wave of separatist agitation in the South-east, which has triggered apprehension and unrest among the people in the region.
Due to the agitation and criminal activities in the region, the Nigerian Army recently launched its Operation Python Dance II in that part of the country.
The launch of the operation led to skirmishes between Nigerian soldiers and IPOB members, leading to a wave of unrest in the region, especially in Aba, Abia state.
On Friday, the Nigerian Army declared Mr. Kanu’s IPOB a “terrorist organization.”
Hours after the Army’s declaration, the South East governors’ forum at a meeting in Enugu also proscribed the separatist organization.
But Mr. Obasanjo said there was nothing wrong if Mr. Buhari established a dialogue with the leader of the separatist movement.
“I don’t see anything wrong in that. I would not object to that; if anything, I would encourage it,” he said.
“I would want to meet Kanu myself and talk to people like him, people of his age, (and ask) ‘What are your worries?’ Not only from the South East but from all parts of Nigeria.”
SOURCE: Premium Times