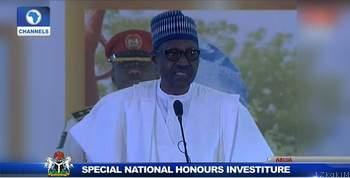 President Muhammadu Buhari has apologised to the family of the presumed winner of the June 12, 1993, presidential election, Moshood Kashimawo Olawale Abiola, for his travails after the election. The president gave the apology in Abuja on Tuesday after conferring the title, Grand Commander Of the Federal Republic on Abiola.

“On behalf of the Federal Government, I tender the nation’s apology to the family of late MKO Abiola, who got the highest vote [in the election], and to those that lost their loved ones in the course of the June 12 struggle,” President Buhari said before getting guests to observe a minute’s silence in honour of those who died.

The decision to honour MKO Abiola and to declare June 12 Democracy Day followed years of clamour by the activists, statesmen, groups as well as the family, associates, and friends of the late businessman and politician. And President Buhari believes it is important for Nigerians to accept the decision “in good faith” and help the nation move forward.