Pictures of bad roads attached to the official statement of the People’s Democratic Party in response to the comment on Nigerian roads by Minister of works and housing, Babatunde Raji Fashola have been fact-checked and discovered to be pictures of Liberia roads.

ELIOLOADED had earlier reported that Babatunde Raji Fashola has declared that the Nigerian roads are not as bad as they are said to be.

This statement made by the minister has created tension as many Nigerians tackled the Minister for works accusing him of downplaying the situation which include a federal lawmaker who challenged him to a road tour so that the Minister could see for himself.

The main opposition party in the country, People’s Democratic Party issued a statement and shared some pictures in which it tackled the Minister for works over his comments on the state of Nigerian roads. 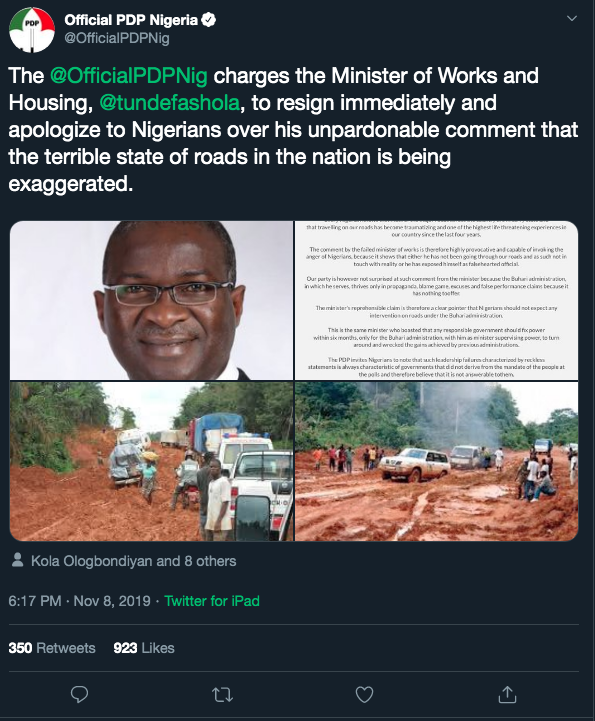 In a statement released by the party’s publicity Secretary, the Minister was asked to resign and apologise to Nigerians over the comment he made on Nigerian roads.

“Every Nigerian knows that most of the major roads across the country are in (a) sorry state and that travelling on our roads has become traumatising and one of the highest life threatening experiences in our country since the last four years,” he said.

“The comment by the failed Minister of Works is therefore highly provocative and capable of invoking the anger of Nigerians, because it shows that either he has not been going through our roads and as such not in touch with reality or he has exposed himself as false-hearted official.”

Barely 12 hours after the reaction of the opposition party, the pictures attached to the party’s statement were subjected to checks and it was discovered that the pictures are not from Nigeria but two different roads in Liberia.

According to reports, an image reverse search of the two pictures brought up various media reports from Liberia in which they have been used with one dating as far back as 2015.

In one of the reports, Liberian Observer, a publication in the country, used one of the pictures which shows cars and a vehicle plying a very bad road, to illustrate how bad roads have delayed travels and inflated fares in western Liberia.

The picture was also used by Front Page Africa, which covers news across Africa, in a report on managing road infrastructure in Liberia. That particular picture was also published by the United States Agency for International Development (USAID): ‘Liberia’s road to discovery’, published on its blog.

A close look at one of one of the cars captured in the picture shows a hilux van with a Liberian licence plate. How did we know this? TheCable checked and confirmed that licence plates in Liberia carry the country’s flag at the top left as seen here.

The second picture, which shows individuals that appear to be working on the road which is in a very bad state, was identified as Ganta-Yekepa highway in a report by Liberian Observer. A clearer version of the picture was posted on Imgur, an online image sharing community, where it was listed among the “Roads of Liberia” in a post dated 2015.