A yet to be unidentified white man, has been caught on camera making racial verbal attacks and spitting at a bus driver after he got enraged when driver asked him to pay his fare.

The incident took place on Tuesday, October 29 at around 8:30 p.m. on the B68 headed toward Bartel-Pritchard Square. According to reports, the elderly man got on the bus a few stops before Avenue J. When the driver asked him to pay his fare, he refused to pay because the bus was late, and then became enraged when the bus driver told him to get off, remaining insistently in the seats reserved for elderly and disabled passengers.

The man who could be seen wearing an airforce medal, had a Russian accent and wore a Philadelphia Flyers jacket. He entered into a foul mouthed, N-word rant at the driver, before spitting at him.

‘Don’t f**k with me, you n*****,’ he said to another rider, as the bus remained pulled over and stopped in response to his unruly behavior.

When the bus driver tells him he has to get off of the bus, the angry man turns his ire toward the driver, saying: ‘You get out, or drive motherf**ker. And shut your mouth, n*****.’

In the video, he is also shouting at another passenger who seems to be standing and telling him he’s wrong. He told her, “Fuck you. Sit down, you piece of shit.”

At another point, he calls the bus driver a ‘redneck.’ The race of the driver and the other riders that the man abuses is not clear from the video.

After unleashing bus racial abuses, the man banged on the door protecting the bus driver and spat at it as he got off the bus. 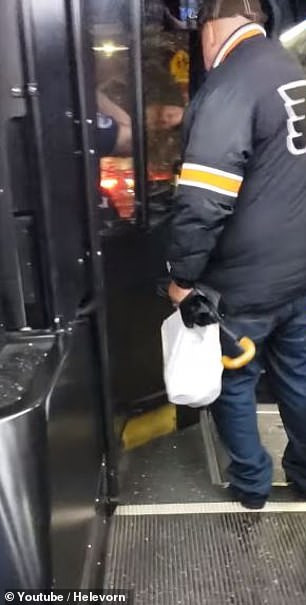 Metropolitan Transit Authority officials have referred the incident to the NYPD for a full investigation.

‘This is abhorrent, racist, and violent behavior, and any crimes committed should result in prosecution to the fullest extent of the law,’ the agency said in a statement.