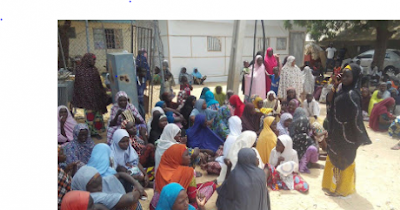 The Office of the UN High Commissioner for Refugees (UNHCR) is seeking additional 9.5 million dollars to scale up its activities in northeast Nigeria for Nigerian returnees from Cameroon.
UNHCR Assistant High Commissioner for Protection, Mr Volker Türk, said the fund was as a result of an unexpected surge in self-organised returns of Nigerian refugees mainly from Cameroon since the beginning of the year.
“This is a new emergency, which requires urgent attention,” Türk, said in a press statement.
He said between January and June, nearly 135,000 refugees returned to Nigeria, mainly women and children.
According to him, the majority left Minawao and Kolofata refugee settlements, in the Far North Region of Cameroon.
“Many of these returnees are unable to go back to their homes due to security concerns and end up being displaced again, in dire humanitarian conditions,” Türk added.
The UNHCR said the situation was particularly difficult in the town of Banki, where many are forced to live outdoors and have limited access to drinking water, food and medicine.
“During my recent visit to the region, I was not only appalled by the scale of the humanitarian needs but also deeply shocked at the level of trauma, social division and distrust.
“We urge the international community to pay more attention to this highly complex and challenging humanitarian and security situation,” said Türk, who visited both Nigeria and Cameroon over the past three weeks.
He pointed out that as vulnerabilities increase over time, funding is, unfortunately, lagging behind needs.
So far, UNHCR has received 41.1 million dollars from donors out of a total funding requirement of 179.5 million dollars for 2017 for Nigeria, Cameroon, Niger and Chad.
He said additional funding would allow UNHCR to increase its presence in border locations and improve border and protection monitoring.
The UN refugee agency also plans to expand reception facilities and launch mass information campaigns to ensure that Nigerian refugees in Cameroon’s Far North have accurate and updated information on the situation prevailing in areas of return in Nigeria.
Türk said that the Governments of both Nigeria and Cameroon gave him assurances that action has been taken to stop involuntary returns.
The first meeting of the Tripartite Commission, comprising representatives from UNHCR, Nigeria and Cameroon, is expected to take place early August.
The Commission was set up after the signature, last March, of a tripartite agreement on voluntary repatriation of Nigerian refugees.
It will be “a positive step forward,” Türk said