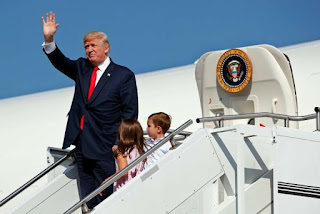 The Trump administration is officially telling the United Nations that the U.S. intends to pull out of the 2015 Paris climate agreement.
The State Department made the announcement late Friday afternoon.
But it doesn’t formally start the process of the U.S. getting out of the voluntary agreement. That’s still to come.
Still, the department describes its communication a “strong message” to the world.
The director of U.S. climate diplomacy during the Clinton and George W. Bush administrations, Nigel Purvis, says countries can’t withdraw from new international agreements, including the Paris climate one, until three years after they go into effect. The Paris agreement went into effect on Nov. 4, 2016.
Then the process takes a year.
The State Department says it can officially start withdrawing as soon as November 2019.